From a young age I knew that something was not right in my life. Was it the artist in me? Something that my parents didn’t provide? But I’m getting ahead of myself.

I remember going to a New England prep school and taking “study habits” in 7th grade. To this day I can’t remember a single thing they taught in the class, but as I got older and in college it dawned on me that no one was teaching this information.

You were just supposed to know how to manage your time, break down large tasks, and move forward.

My mother nicknamed me “cliff” for “cliff hanger” because I would always put off school things to the last minute.

My father, a Type A personality with a sensitive heart, talked to me about success, that I could do anything I wanted to; I could see him just muscle his way through most things.

My mother, an intellectual who ended up being a homemaker when she would have preferred to be a professor, could provide knowledge but couldn’t understand me and my emotional needs.

So I went at it alone, trying to figure out who I was and how to balance things.

They loved me, but they couldn’t provide everything I needed.

When I entered college, my life changed dramatically. Previously, I was smart enough to get by on my intelligence alone.

I was in a large university for Computer Science and Engineering and the philosophy of the program was likened to medical school. 50% of the class dropped out in the first year due to the workload. I was able to keep up, but no longer as the A and B national honor student in the 99th percentile that I once was.

I wanted to be social as well, and I tried to be, but it was getting harder.

Sophomore year, I hit a wall.

Anxiety attacks, including vomiting on a daily basis and being unable to eat, plagued me. I had reached the limits of my skills. I created my own personal psychological hell. I was actually still able to get As and Bs, but I took it out on myself to meet the standards.

The standards had been my identity and now I was losing my ability to meet them, and losing myself in the process. I started to realize that the standards didn’t make sense.

Looking back I can see that I had certain patterns that set me up to be a powder keg.

It was only a matter of time before something lit the fuse. I had few personal boundaries when it came to time. I didn’t understand balance, managing emotions, having a mission.

I didn’t know about having a why, or what my strengths were besides being smart. I was there to “do well so I could be successful” except I had no idea what successful was, but I was pretty sure it was not what I was experiencing.

It was in college in the late 1980s and early 1990s that I started searching for these answers.

Always a man who talked about integrity, my father introduced me to the Steven Covey books. I started reading psychology books, trying to figure out what my problem was. I was learning about the importance of managing emotions and that some patterns work and some do not.

I realized that even though I thought my parents had done something wrong with me, it did not matter — I owned and was living these patterns.

After college, I was able to get a job at Microsoft even before I graduated, and I moved to the Seattle area. While I had learned to manage my emotions better, I still had issues.

I got involved in the “personal effectiveness” movement.

I learned about responsibility vs. guilt and blame. I was growing and I had knowledge, but applying it took time.

I was successful at Microsoft and learned a lot, but still had trouble balancing my life.

I had learned in college that you needed to govern yourself. I saw people around me pushing to get ahead as they saw people earning a lot of money and retiring. I was able to support myself and accomplish a lot, but being happy was elusive. I wasn’t driving from vision; I was running from something else.

Emotionally, I still felt like my head was underwater.

In short, I was and still am an artist, but did not want to live the clichéd, tortured life of some artists.

I wanted to flow and be alive, but structured enough to be effective.

Two parts of me fought it out. I tried a number of other methods as I knew the direction but not how to balance.

To everyone around me I appeared to be a well-balanced individual, but I could feel the gap between what I was and what I wanted to be and was capable of.

Sum up to say that due to a number of patterns in my life, I was getting in my own way.

Along came working for J.D. Meier.

I had known J.D. in the 1990s in the Developer Support group at Microsoft. I now had a chance to work with him in the patterns & practices group.

I realized that the content and format of Agile Results worked well for what I was trying to do — quickly understand myself as a human system and to tune and improve that system while working with my human and creative aspects.

I like Agile Results for many reasons, but here are a few specifics.

Has Agile Results “fixed” my life?

It cannot do that. This is up to me.

But the book has given me a great toolbox for the job. It’s made the process seem much simpler than I previously thought. I can more easily see patterns that do not work and correct them using strategies in the book.

I highly recommend it.

I am J.D. Meier, the creator of Agile Results. My approach has been forged in the fire of the fast-moving software business. 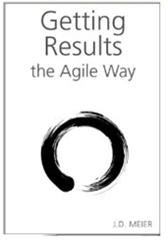