How Tony Robbins Transformed His Life with Goals 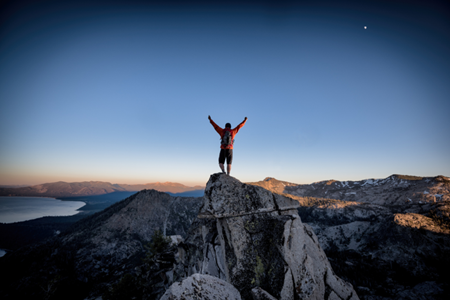 “Live life fully while you’re here. Experience everything. Take care of yourself and your friends. Have fun, be crazy, be weird. Go out and screw up! You’re going to anyway, so you might as well enjoy the process.” – Tony Robbins

This is the story of how Tony Robbins changed his life with goals.

To set his goals, Tony Robbins started by dreaming big.  He imagined a compelling future that created a burning desire for how he wanted his life to be, and the person he wanted to become.

Tony Decided He Did Not Want to Live This Way Anymore

Tony Robbins wanted to change his life with a passion.

He had hit rock bottom.

He was frustrated and feeling like a failure.  He was physically, emotionally, spiritually, and financially “broke.”  He was alone and almost 40 pounds over-weight.  He was living in a small, studio apartment where he had to wash his dishes in the bathtub, because there was no kitchen.

Tony Robbins decided he would not live this way anymore.

In Awaken the Giant Within: How To Take Immediate Control of Your Mental, Emotional, Physical, and Financial Destiny, Tony Robbins shares how he dreamed big, and used goals to change his life.

Tony Robbins changed his life by dreaming big. He set aside any limiting beliefs.  He imagined a compelling future of what he wanted in his life.

“Eight years ago, in 1983, I did an exercise that created a future so compelling that my whole life changed as a result.

As part of the overall process of raising my standards, I established a whole new set of goals, writing down all the things I would no longer settle for, as well as what I was committed to having in my life.

I set aside all my limiting beliefs and sat down on the beach with my journal.”

Tony Created a Future Picture of Doing, Being, Having, Creating, Experiencing, and Contributing

Tony Robbins wrote for three hours on what he wanted his future life to be like.

“I wrote continuously for three hours, brainstorming every possibility of what I could ever imagine doing, being, having, creating, experiencing, or contributing.

The time line I gave myself for achieving these goals was any time from tomorrow to the next twenty years.

I never stopped to think whether I could actually achieve these goals or not.

I simply captured any possibility that inspired me, and wrote it down.”

Tony Robbins created clarity on all the major dimensions of his life.  He then created milestones that he could work towards to turn his dreams into reality.

“From the beginning, I refined the process six moths later when I was invited along with a group of parapsychologists to the USSR to study psychic phenomena directly from university experts throughout Russia.  As my group traveled the country, I spent many hours on the train from Moscow to Siberia and back to Leningrad.

With nothing to write on but the back of an old Russian map, I wrote down all my long-term goals for my spiritual, mental, emotional, physical, and financial destinies, and then created a series of milestones for each one, working backward.”

Tony Asked What Kind of Person He Would Need to Become

Tony Robbins got specific about the kind of person he would need to become, and he added details to what he wanted in terms of the woman of his dreams, his future family, his future income, and the home of his dreams.

“For example, in order to achieve my top spiritual goal ten years from now, what kind of person would I have to be, and what things would I need to accomplish by nine years from now, eight years, seven years, and so on, reaching all the way back until today?

On that day, I set specific goals that transformed my life.

Even Tony was amazed by how many of the goals he had written down came true, within a short period of time.

Robbins writes:
”A year and a half later, Life magazine was in my home, interviewing me as to how I had made such incredible shifts in my life.

When I pulled out my map to show them all the goals I had written down, it was amazing to see how many I’d achieved.

I had me the woman I descried down to the finest detail, including the third-story office in the turret of the castle, overlooking the ocean.

When I wrote them down initially, I had no assurances whatsoever that these goals could be achieved.

But I had been willing to suspend judgment for a short period of time in order to make it work.”

I think Tony Robbins’ story is really about how you can create amazing change by creating a compelling future and writing it down to create increasing clarity.

He turned his pain into possibility, and his possibility into his purpose and his passion.

From there, it was a matter of taking massive action, getting results, and changing his actions based on feedback until he produced the results he wanted.

His burning desire fueled his brilliant breakthroughs and transformed his life.

If you don’t want to live like this anymore, write out the changes you want in your life with boldness, clarity, and passion.

As Tony Robbins says, ““Goals are like magnets. They’ll attract the things that make them come true.”

And keep in mind, Tony’s advice for dreaming big:

“Create a vision and never let the environment, other people’s beliefs, or the limits of what has been done in the past shape your decisions.”

The Goals Guide
10 Big Ideas from Agile Results
10 Reasons That Stop You From Reaching Your Goals
How Tony Robbins Sets Goals
How John Maxwell Sets Goals
How Dreams, Goals, and Habits Fit Together
Create If-Then Plans to Stick With Your Goals
The Three Wins Approach – Chunk Your Tasks into Meaningful Results
The Life Hot Spots Framework: 7 Categories for Balancing Your Life
How To Set Goals and Achieve Them
How I Create Better To-Do Lists the Agile Way
How To Use 3 Wins to Have Your Best Year Ever
How To Use Three Wins for Change and Transformation

I am J.D. Meier, the creator of Agile Results. My approach has been forged in the fire of the fast-moving software business. Learn more ...

What is Agile Results?

Agile Results is a simple productivity system for work and life. It helps you spend more time in your strengths, less time in your weaknesses, and do the things that matter most, with focus, clarity, and better energy. Learn more...

The Book that Changes Lives

Check out the book... 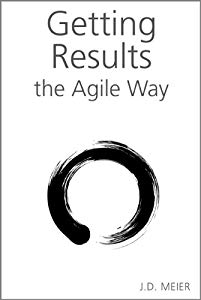